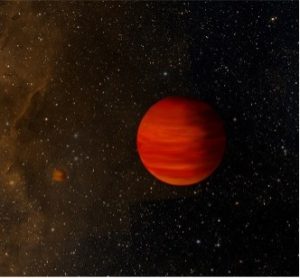 Maunakea, Hawaiʻi – A team of astronomers has discovered a rare pair of brown dwarfs that has the widest separation of any brown dwarf binary system found to date.

“Because of their small size, brown dwarf binary systems are usually very close together,” said Emma Softich, an undergraduate astrophysics student at the Arizona State University (ASU) School of Earth and Space Exploration and lead author of the study. “Finding such a widely separated pair is very exciting.”

The study, which is based on observations the University of California San Diego (UC San Diego) Cool Star Lab conducted with W. M. Keck Observatory on Maunakea, Hawaiʻi Island, is published in today’s issue of The Astrophysical Journal Letters.

Using Keck Observatory’s Near-Infrared Echellette Spectrometer, or NIRES instrument,  members of the UC San Diego Cool Star Lab, including Physics Professor Adam Burgasser and graduate students Christian Aganze and Dino Hsu, obtained infrared spectra of the brown dwarf binary system, called CWISE J014611.20-050850.0AB. The data revealed the two brown dwarfs are about 12 billion miles apart, or three times the separation of Pluto from the Sun. This distance confirms the unusual brown dwarf couple breaks the record for having the widest separation from each other.

“Keck’s exceptional sensitivity in the infrared with this instrument was critical for our measurements,” said co-author Burgasser, who leads the Cool Star Lab. “The secondary brown dwarf of this system is exceptionally faint, but with Keck we were able to obtain good enough spectral data to classify both sources and identify them as members of a rare class of blue L dwarfs.”

“Wide, low-mass systems like CWISE J014611.20-050850.0AB are usually disrupted early on in their lifetimes, so the fact that this one has survived until now is pretty remarkable,” said co-author Adam Schneider of the U.S. Naval Observatory, Flagstaff Station and George Mason University.

WISE (left) and the Dark Energy Survey Collaboration (DES) (right) images of CWISE J0146-0508AB. In the lower-resolution WISE image, the pair are blended into a single point-source, while two distinct entities are visible in the higher-resolution DES image. The reddish hue of both objects in the DES image shows that they emit much of their light in the infrared, a trait typical of brown dwarfs. Credit: WISE/DES/Softich et al

Brown dwarfs are celestial objects that are smaller than a normal star. These objects are not massive enough to sustain nuclear fusion and shine like normal stars, but are hot enough to radiate energy.

Many brown dwarfs have been discovered with data from NASA’s Wide-field Infrared Survey Explorer (WISE) via the Backyard Worlds: Planet 9 citizen science project, which solicits help from the public to search the WISE image data bank to find brown dwarfs and low-mass stars, some of the Sun’s nearest neighbors.

For this study, the researchers inspected images of Backyard Worlds discoveries, where companion brown dwarfs may have been overlooked. In doing so, they discovered the rare CWISE J014611.20 050850.0AB brown dwarf binary system.

Softich went through about 3,000 brown dwarfs from Backyard Worlds one by one and compared the WISE images to other survey images, looking for evidence of a brown dwarf companion to the original target. The team then used data from the Dark Energy Survey (DES) to confirm that it was indeed a brown dwarf pair.

They then used Keck Observatory’s NIRES to confirm the brown dwarfs have spectral types L4 and L8, and that they are at an estimated distance of about 40 parsecs, or 130.4 light-years from Earth, with a projected separation of 129 astronomical units, or 129 times the distance between the Sun and the Earth.

The team hopes this discovery will allow astronomers the chance to study brown dwarf binary systems and to develop models and procedures that will help in recognizing more of them in the future.

“Binary systems are used to calibrate many relations in astronomy, and this newly discovered pair of brown dwarfs will present an important test of brown dwarf formation and evolution models,” said co-author Jennifer Patience, Softich’s adviser at ASU.