Zooming in on Infant Planetary Systems 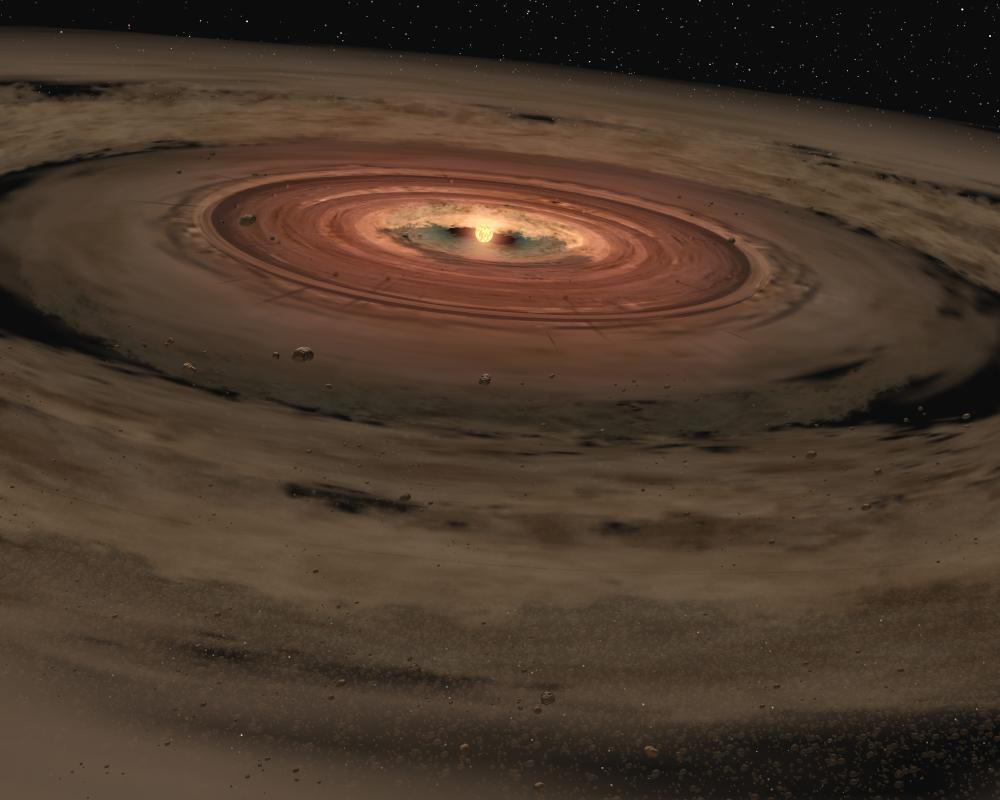 Like a raindrop forming in a cloud, a star forms in a diffuse gas cloud in deep space. As the star grows, its gravitational pull draws in dust and gas from the surrounding molecular cloud to form a swirling “protoplanetary disk.” This disk eventually further consolidates to form planets, moons, asteroids and comets. Credit: NASA/JPL-Caltech.

Using both 10-meter Keck telescopes together, astronomers at the W. M. Keck Observatory have been able to peer deeper into proto-planetary disks, swirling clouds of gas and dust that feed the growing stars in their centers and eventually coalesce into new planetary systems.

The team studied 15 young Milky Way stars varying in mass between one half and ten times that of the Sun and used the Keck Interferometer to obtain extremely fine observations to pinpoint the location of the processes that occur right at the boundary between the stars and their surrounding disks, which sit 500 light years from Earth.

The Keck Interferometer combines both 10-meter Keck telescopes to act as an 85-meter telescope, and is a project funded by NASA, in a partnership between the Jet Propulsion Laboratory, the NASA Exoplanet Science Institute and the Keck Observatory. Four years ago, with a grant from the National Science Foundation, a quest began to expand the astrometric capability of the Keck Interferometer with a specifically engineered instrument named ASTRA, or ASTrometric and phase-Referenced Astronomy.

ASTRA aims to provide extremely precise measurements of the positions and movements of stars, gas and dust. “With it in its current state, we are going for young stars and their dust disks,” said Keck Observatory scientist Julien Woillez, co-investigator of the new research and lead of the ASTRA instrument. “As we improve ASTRA, we will soon have the capability to study the motion of planets around older stars, and even the motion of stars around the black hole at the center of our Galaxy.”

The resolution achieved in this study, which will be published in the July 20 Astrophysical Journal, allowed the team to observe proto-planetary disk material within 0.1 astronomical units, or nine million miles, of the target star. One astronomical unit is roughly 93 million miles, or the distance between the Sun and Earth. The precision measurements would be similar to standing on a rooftop in San Francisco and trying to observe a Nene goose nibbling on a grain of rice in Hawai’i.

Read the full story on the Observatory’s news page.