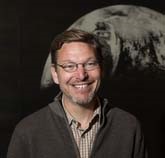 Five years ago, Dr. Brown and his team proposed that unexpected perturbations to the most distant known objects in our solar system could be explained by the existence of an unseen giant planet well beyond Neptune, gently tugging on these objects. Dr. Brown will provide an update on his progress in the search for Planet Nine, including new discoveries which continue to strengthen the hypothesis, new analysis which refines where to look, and new observations that will — sometime soon — reveal this hidden giant.