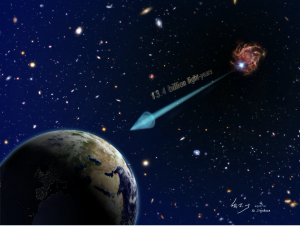 an artist’s conception of the most distant galaxy with a gamma-ray burst.
Credit: Jingchuan Yu

The researchers, led by Professor Linhua Jiang at the Kavli Institute for Astronomy and Astrophysics at Peking University, obtained near-infrared spectra with the Multi-Object Spectrograph for Infrared Exploration (MOSFIRE) on the Keck I telescope and successfully measured the distance of a very faint galaxy located 13.4 billion light-years away (redshift of z = 10.957).

Named GN-z11, the galaxy was generally believed to be at a redshift greater than 10, probably closer to 11, based on existing data from NASA’s Hubble Space Telescope. But its exact redshift remained unclear, until now.

The results of the study, which are based on observations made under the time exchange program between Keck Observatory and Subaru Telescope on Maunakea, are published in the December 14, 2020 issue of the journal Nature Astronomy.

During their observations at Keck Observatory, the team also serendipitously detected a bright burst coming from the galaxy. After performing a comprehensive analysis, the team ruled out the possibility that the flash was from any known sources such as man-made satellites or moving objects in the solar system and determined it may have been produced by a gamma-ray burst.

A paper regarding this possible bright ultraviolet flash from GN-z11 is also published in the December 14, 2020 issue of Nature Astronomy.

Both studies are important to understanding the formation of stars and galaxies in the very early universe.