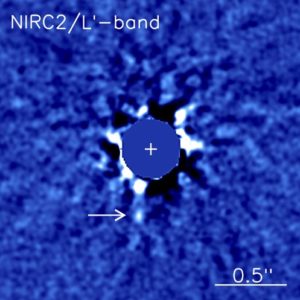 w. m. keck observatory, christian marois, nrc canada
Image of 51 Eri b as seen by the NIRC2 instrument on Keck Observatory's Keck II telescope. The bright central star has been mostly removed by a mask to enable the confirmation of the exoplanet one million times fainter.

MAUNAKEA, Hawaii – A team of astronomers discovered a Jupiter-like planet within a young system that could serve as a decoder ring for understanding how planets formed around our sun. The W. M. Keck Observatory on Maunakea, Hawaii confirmed the discovery. The findings were headed by Bruce Macintosh, a professor of physics at Stanford University,  and show the new planet, 51 Eridani b, is one million times fainter than its parent star and shows the strongest methane signature ever detected on an alien planet, which should yield additional clues as to how the planet formed. The results are published in the current issue of Science.

“This is the first exoplanet discovered with the Gemini Planet Imager, one of the new generation instruments designed specifically for discovering and analyzing faint, young planets orbiting bright stars,” said Franck Marchis, Senior Planetary Astronomer at the SETI Institute and member of the team that built the instrument and now conducts the survey.

While NASA’s Kepler space observatory has discovered thousands of planets, it does so indirectly by detecting a loss of starlight as a planet passes in front of its star, the Gemini Planet Imager was designed specifically for discovering and analyzing faint, young planets orbiting bright stars.

“To detect planets, Kepler sees their shadow,” said Macintosh, who is also a member of the Kavli Institute for Particle Astrophysics and Cosmology. “The Gemini Planet Imager instead sees their glow, which we refer to as direct imaging.”

Akin to trying to detect a firefly in front of a lighthouse, the team analyzed the light from the star, then blocked it out. The remaining incoming light was analyzed, with the brightest spots indicating a possible planet.

The team then turned to the largest optical/infrared telescopes on Earth at Keck Observaotry to verify their findings.

“Observations using the NIRC2 camera and adaptive optics system at the Keck Observatory allowed the GPI team to independently verify the existence of the planet,” Macintosh said. “NIRC2 can observe at longer infrared wavelengths than GPI, where a cool planet like 51 Eri b is brighter. These longer-wavelength observations helped to measure the properties of clouds in the planet’s atmosphere that absorb and re-radiate infrared emission.”

“The Keck Observatory data was crucial to confirm the existence of the planet, and to properly characterize its atmosphere,” said Christian Marois, an astronomer at the University of Victoria, Canada. “With a versatile set of instruments and a larger primary mirror, the Keck Observatory telescopes provide the perfect platform to verify these findings.”

Last year, the GPI was installed on the 8-meter Gemini South Telescope in Chile, and the team set out to look for planets orbiting nearly 100 young stars so far.

The host star, 51 Eri, is very young, a mere 20 million years old, and is slightly hotter than the Sun. The exoplanet 51 Eri b, whose mass is estimated to be roughly twice that of Jupiter, appears to orbit its host star at a distance 13 times greater than the Earth-Sun distance. If placed in our own solar system, 51 Eri b’s orbit would lie between those of Saturn and Neptune.

“51 Eri has everything we’re looking for in a target star,” notes Eric Nielsen, a postdoctoral fellow at the SETI Institute. “It’s relatively close and young. Indeed, the last dinosaur died 40 million years before this star was even born.”

As far as the cosmic clock is concerned, 20 million years is young, and that is exactly what made the direct detection of the planet possible. When planets coalesce, material falling into the planet releases energy and heats it up. Over the next hundred million years the planet radiates that energy away, mostly as infrared light.

In addition to being the lowest-mass planet ever imaged, it’s also one of the coldest – 800 degrees Fahrenheit, whereas others are around 1,200 F – and features the strongest atmospheric methane signal on record. Previous Jupiter-like exoplanets have shown only faint traces of methane, far different from the heavy methane atmospheres of the gas giants in our solar system.

“In the atmospheres of the cold giant planets of our solar system, carbon is found as methane, unlike most exoplanets, where carbon has mostly been found in the form of carbon monoxide,” said Mark Marley, an astrophysicist at NASA Ames Research Center. “Since the atmosphere of 51 Eri b is also methane rich, it signifies that this planet is well on its way to becoming a cousin of our own familiar Jupiter.”

All of these characteristics, the researchers say, point to a planet that is very much what models suggest Jupiter was like in its infancy. Of course, it’s not exactly like Jupiter – its 800 F temperature is still hot enough to melt lead – but there are signs it will evolve into a familiar shape.

In addition to expanding the universe of known planets, GPI will provide key clues as to how solar systems form. Astronomers believe that the gas giants in our solar system formed by building up a large core over a few million years and then pulling in a huge amount of hydrogen and other gases to form an atmosphere.

But the Jupiter-like exoplanets that have so far been discovered are much hotter than models have predicted, hinting that they could have formed much faster as material collapses quickly to make a very hot planet. This is an important difference. The core-buildup process can also form rocky planets like Earth; a fast and hot collapse might only make giant gassy planets. 51 Eridani b is young enough that it “remembers” its formation.

“51 Eri b is the first one that’s cold enough and close enough to the star that it could have indeed formed right where it is the ‘old-fashioned way,” Macintosh said. “This planet really could have formed the same way Jupiter did – the whole solar system could be a lot like ours.”

There are hundreds of planets a little bigger than Earth out there, Macintosh said, but there is so far no way to know if most of them are really “super-Earths” or just micro-sized gas and ice planets like Neptune, or something different altogether. Studying younger solar systems such as 51 Eridani will help astronomers understand the formation of our neighbor planets, and how common that planet-forming mechanism is throughout the universe.