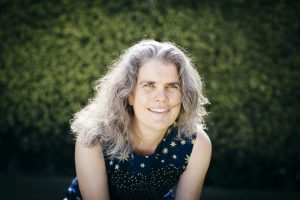 Maunakea, Hawaii – Longtime W. M. Keck Observatory observer Dr. Andrea Ghez, UCLA’s Lauren B. Leichtman and Arthur E. Levine Professor of Astrophysics and director of the UCLA Galactic Center Group, has won the Nobel Prize in Physics 2020 for her revolutionary research using Keck Observatory to prove the existence of a supermassive black hole at the center of our Milky Way galaxy.

The Nobel Prize committee announced today that astronomers Prof. Ghez, along with Prof. Reinhard Genzel were recognized for providing the conclusive evidence of the black hole’s existence; theoretical physicist Dr. Roger Penrose was recognized for his theoretical contributions showing that black holes were an inevitable consequence of Einstein’s General Theory of Relativity. 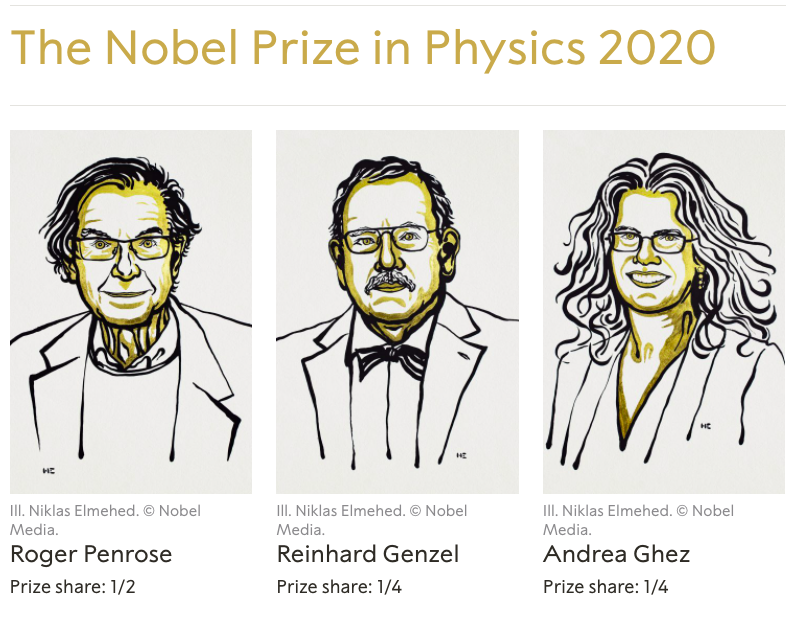 “Working closely with Keck Observatory and our Hawaii staff of engineers and scientists, Dr. Andrea Ghez harnessed the power of the Observatory’s optical/infrared telescopes and Maunakea’s unparalleled view of the universe to conduct pioneering research proving the existence of a supermassive black hole at the center of our Milky Way Galaxy,” says Hilton Lewis, Director of W. M. Keck Observatory. “We couldn’t be more elated for Andrea, who has devoted the entirety of her career to this research – over 25 years ­­– all done at Keck Observatory. As only the fourth woman ever to win the Nobel prize, this is a tremendous accomplishment for Andrea, and puts her in the company of such scientific luminaries as Madame Curie. Andrea works tirelessly to expand our horizons and drive technological innovations within our field, while being as passionate about sharing science with the public. She has given many public lectures right here in Hawaii and is recognized as a compelling speaker. Her teaching and research serves as an inspiration to aspiring scientists everywhere. She is a role model for our youth in what a commitment to an idea coupled with ability and tenacity can achieve. This is a monumental day for astronomy done right here in Hawaii.” 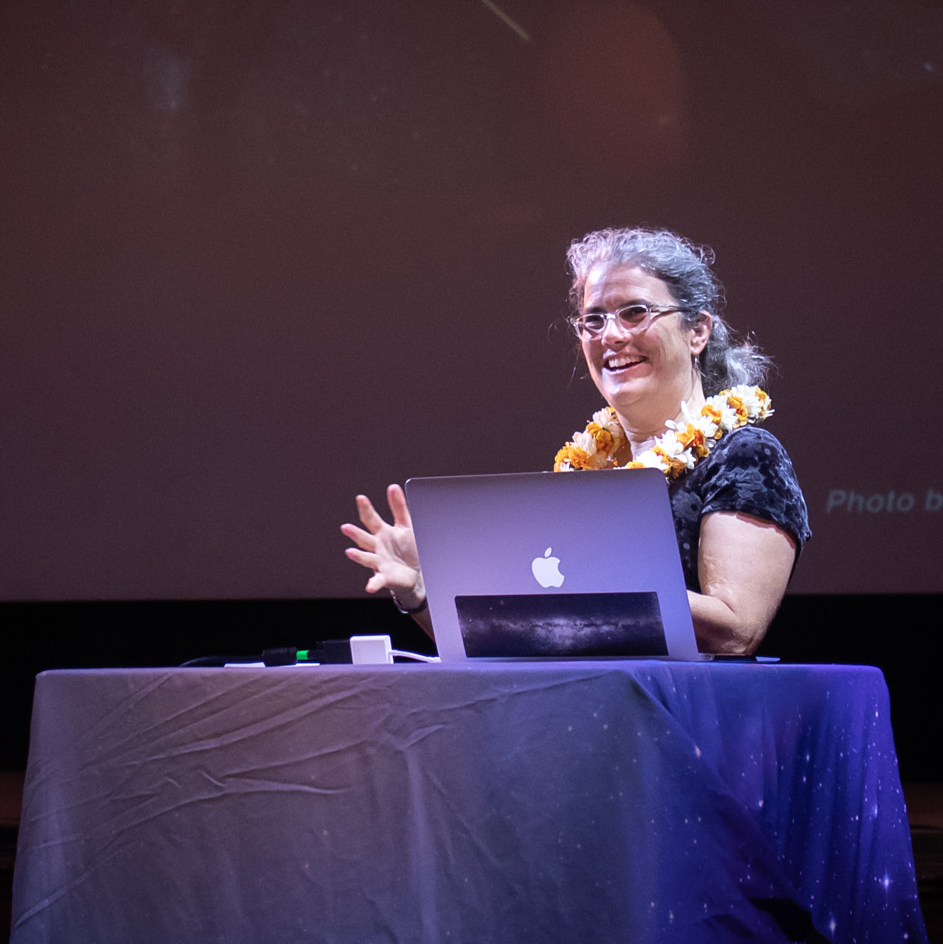 Ghez’s most recent breakthrough was announced in July of 2019, after her team completed the most comprehensive test ever of Einstein’s general theory of relativity. In a study published in the journal Science, Ghez and her team used Keck Observatory’s adaptive optics (AO) technology to track multiple stars orbiting the black hole to conclusively prove the black hole existed. They tracked one star for nearly a quarter century to see how gravity behaved as the star orbited dangerously close to the Milky Way’s supermassive black hole; they found in the words of Dr. Ghez, that “Einstein’s right, at least for now. However, his theory is definitely showing vulnerability.”

“Andrea has been using the Keck telescopes and adaptive optics systems to study the Galactic Center for over two decades now,” said Peter Wizinowich, chief of technical development at Keck Observatory who has worked with Ghez since AO was first envisioned at the Observatory. “She has been very inclusive of the people that build the astronomical systems she uses and has been very collaborative in pushing us and these systems to excel. Andrea has also been a great mentor for her students and role model for many young women. It is fantastic to see her creativity, leadership and long term rigor rewarded with the Nobel prize.”

AO is a technique used to remove the blurring of astronomical images caused by turbulence in the Earth’s atmosphere. Keck Observatory was the first large telescope to deploy AO; Ghez played a key role in the development of the cutting-edge technology and continues to collaborate with the Observatory’s team of engineers and scientists to advance AO to a next-generation level by way of the Keck All-sky Precision Adaptive optics project.

Ghez uses Keck Observatory’s AO in combination with the Near-Infrared Camera, second generation (NIRC2) and the OH-Suppressing Infrared Imaging Spectrograph (OSIRIS) to see with unprecedented clarity the movement of stars orbiting around an invisible force at the Galactic Center – a force that she proved was a supermassive black hole. The discovery turned a more than a quarter-of-a-century-long theory into reality.

Prof. Ghez started her Keck Observatory observations using a speckle imaging mode she initiated with a first generation Near-Infrared Camera (NIRC). In 2000, Ghez and her research team reported that for the first time, astronomers had seen stars accelerate around the supermassive black hole. In 2003, she and her team reported that the case for the Milky Way’s black hole had been strengthened substantially and that all of the proposed alternatives could be excluded. In 2005, Ghez and her colleagues took the first clear picture of the center of the Milky Way, including the area surrounding the black hole, at the Keck Observatory.

Ghez has earned numerous honors for her research, including election to the National Academy of Sciences and the American Academy of Arts and Sciences. In 2012, she became the first woman to receive the Royal Swedish Academy of Sciences’ Crafoord Prize, and she was named a MacArthur Fellow in 2008. In 2019, she was awarded an honorary degree by Oxford University.

She earned a bachelor’s degree in physics from MIT in 1987 and a doctorate from Caltech in 1992, and she has been a member of the UCLA faculty since 1994.

“It’s a unique story because it’s been decades of work, and that took force of will, force of spirit, and force of scientific ingenuity in Andrea Ghez,” said John O’Meara, chief scientist at Keck Observatory. “It took the best instrumentation in the world, it took the biggest telescope in the world, and it took time. Andrea’s tenacity and perseverance as a black hole detective is certainly deserving of a Nobel Prize. We are absolutely thrilled for her!”

The OH-Suppressing Infrared Imaging Spectrograph (OSIRIS) is one of W. M. Keck Observatory’s “integral field spectrographs.” The instrument works behind the adaptive optics system and uses an array of lenslets to sample a small rectangular patch of the sky at resolutions approaching the diffraction limit of the 10-meter Keck Telescope. OSIRIS records an infrared spectrum at each point within the patch in a single exposure, greatly enhancing its efficiency and precision when observing small objects such as distant galaxies. It is used to characterize the dynamics and composition of early stages of galaxy formation. Support for this technology was generously provided by the Heising-Simons Foundation and the National Science Foundation.

The W. M. Keck Observatory telescopes are among the most scientifically productive on Earth. The two, 10-meter optical/infrared telescopes on the summit of Maunakea on the Island of Hawaii feature a suite of advanced instruments including imagers, multi-object spectrographs, high-resolution spectrographs, integral-field spectrometers, and world-leading laser guide star adaptive optics systems. Keck Observatory is a private 501(c) 3 non-profit organization operated as a scientific partnership among the California Institute of Technology, the University of California, and the National Aeronautics and Space Administration. The Observatory was made possible by the generous financial support of the W. M. Keck Foundation. The authors wish to recognize and acknowledge the very significant cultural role and reverence that the summit of Maunakea has always had within the Native Hawaiian community.  We are most fortunate to have the opportunity to conduct observations from this mountain.